The PBT or “President’s Bludge Trip” was started in 1974 by then president Steve Williamson. It was quickly realised that the Kowmung River in early October was as close to paradise on this Earth as is possible. Leading the October Long Weekend trip became an expected duty of the president. From 1974 there has been an unbroken chain of PBT’s. Numbers of participants has ranged from as few as 2 in lean years to over 30 with typical numbers being around 25. Large campfires and riotous singing and recitations are an essential part of the walk. Often, conditions permit the easy catching of trout from the Kowmung or its tributaries.

In 1993, the SUBW constitution was changed and the leading of the PBT was added as an official duty of the president. Over the years, all parts of the Kowmung River have been visited. On some trips, the main party splits up with some walkers choosing more adventurous abseiling routes into the valley via the waterfalls of the branches of Christies Creek.

For a club without much formality, the PBT is one tradition that continues.

My version, subject to middle age nostalgia, of how they started, by Steve Williamson. Finer points may be negotiated. 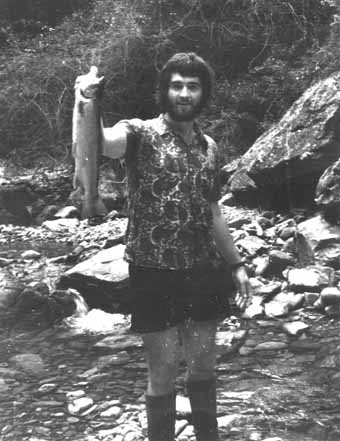 Above – Steve Williamson on the Kowmung. Photo – Ian Hickson.

My introduction to bushwalking with SUBW was a very long day trip from Batsh Camp to Colong Caves and the Kowmung River, led by Jim Seabrook in 1970. Like most people, I had not heard of the Kowmung before then, and I did not realise then what a precious river it is.

During my time in SUBW I did numerous trips using various routes to the Kowmung, mostly weekend trips but sometimes taking advantage of longer breaks such as Easter and October. Liloing between September and May is comfortable, and the river had few fallen trees to provide lilo eating snags and obstructions then – a very large flood in about 1977 brought down many trees and changed this.

The first October long weekend trip that I remember leading to the Kowmung was in 1973. This trip went via Cloudmaker to Ti Willa Plateau on the Saturday, then via the Gingra Creek junction to a camp somewhere upstream on Sunday, before exiting via Hughes Ridge. We struck a heat wave on the first 2 days, and Julia Boddington collapsed with heat exhaustion as we neared Cloudmaker. We rigged a shelter over her to keep the sun off, and Ian Hickson valiantly set off get water from Ti Willa Creek. Ian saved the day, and as soon as Julia got enough water into her, she was back to (almost) normal again. On day two of this trip, the red bellied black snakes were out for their annual October riverbank festival. Ian and I got a bit fed up with the snakes, and we tried rocks as a means of gently giving them a hint. This backfired on us when Ian landed what he called a “small” (200mm) rock on one – the snake had an underdeveloped sense of direction and shot back at us at full speed. Joanne Richardson said she was amazed at how fast people with full packs on can run!

I was President of SUBW in 1974. Ian Hickson has capably described the 1974 trip, where we went in via Arabanoo Creek – this would have been to get creek walking out of our systems.

The 1975 trip featured lilos. Wendy McKenzie and Ian Neuhaus were some of those who escaped Ian’s memory and were members of this trip. The club President, Ross Bradstock, was there, however I organised and led it.

In about 1977 I revisited the Kowmung as part of what was now called the annual President’s trip, and I was pleased to see that a good idea was being perpetuated.