Left on Friday afternoon in Jerry’s car, had tea at a Chinese place in Windsor, & followed the road to Newnes until a sign warned us of loose rocks above roadway. Needless to say we pressed on regardess (even though the rocks on the road looked as if they would go straight thru the car if they fell on it) until stopped by a creek of unknown depth — so here we spent the night.

Came morning — breakfast — found creek not too bad, & on to one horse town of Newnes. Outstanding feature was the picturesque ancient wooden hotel (locked — obviously drive in — tractors, cars etc were lined up on the verandah).

Hence we started late. Started out for Glen Davis, wandered up wrong stream, returned, up right one, followed pipeline, & had lunch over the ridge. This is were we left the only map among us. Blundered off the track, & finally came to the 3 horse town of Glen Davis ( 5 o’clock).

As we were behind time, (we had intended following Capertee & Wolgan rivers around a further 40 miles or so) we decided to follow the river down until we got to fresh water where we would camp, & the next day go over the top. For this we were classed as mad by one resident who said it was impossible. (The mountains are all lined with impressive cliffs which he said were impassible.) 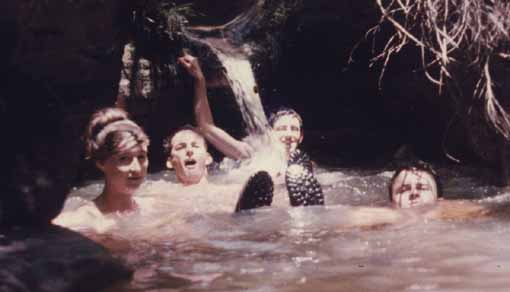 We did follow the plan, although we didn’t know where we were going (no map). The stream we followed up came from a small canyon (The first I have seen). At one stage the water came thru a hole in a blank wall at water level. On swimming under, we came into a cavern straight out of some fairy tale. The water came from a hole about 20′ above. This hole let enough light thru to give everything a mystic touch. The roof was above us in a dome, the whole cavern being of roughly spherical shape, about 15 ft across at the bottom. We couldn’t follow the water here so we went upwards (outside the cavern) & met the creek further on. Came to a perfect swimming hole, where we lunched, after which it was generally upwards until the top of the ridge. We followed this for a few hours, and eventually came to the highest point for miles around. The view was really spectacular (easily outdoes Splendour Rock). We could see (we reckoned) cliffs about 60 miles away. On one side the lush valley, and everywhere else rugged cliff-capped mountains. Unfortunately, we were rather too late and thirsty to enjoy it properly. We had to get water somehow, & we didn’t have a map, & we all felt we could do with a bit of sleep. Plan of action was made (only involved going downward till water) & duly carried out. On wandering down a minor ridge we could see cliffs all about us, generally indicating canyons. Finally reached water, after abseiling the last 60 ft in the dark. We were in a large canyon, one feature of which was glow worms. After tea, at last, sleep.

Awakened by assortment of lyre birds, whip birds etc. We saw the canyon properly now, lush undergrowth, tall thin trees etc. Karl & Jerry explored up a smaller canyon coming into the main one & came back dripping! The main canyon fortunately was not like this — it had (most of the way) drier ground to walk on.

We should have been in Sydney the night before. Note, that, although overdue, with no map, not knowing where we were, we were still not lost. By following the canyon until the river, & then by following the river we would get to Newnes again. Which we did. Where we had a swim in the filthy old river. Then drove out, (before the blasting operations which would close the only way out — [another reason for not being overdue] had taken place).

Rang Sydney at 1 o’clock, thus being 13 hours overdue, & eventually got back that night.