My Introduction to the SUBW

Paddy Pallin’s shop, in an old crumbling building in George Street near Wynyard, was the information centre of the bushwalking fraternity in the early post – war years.

Shortly before Christmas 1949 I saw a notice on Paddy’s board inviting anyone interested in joining a walk from Kosciusko to the Victorian Alps to ring Frank Peters.

I rang and spoke to Frank’s mother and gave her my name. She asked what course I was doing and I replied “Law, through the Solicitors Admission Board”.

It was not until later that I became aware that some of that telephone conversation, including my name, lost something in its later translation to her son.

Somewhat full of Christmas cheer I first met Frank one evening at his home with other members of our party which later included Dennis Robinson, Jack Scott, Bruce McInnis, Betty Blunt, Geoff Pople and Jack Madden.

I thought I noticed a raising of eyebrows, when I readily accepted the offer of a drink (or two) at that first meeting, However it was not until several days into our walk, one morning in the Geehi valley, that the suspicions which had been on Frank’s mind were finally put to rest. “You know Doug”, he said “Given some of your comments and your colourful language, for a missionary, you really have me puzzled”.

His usual taciturn manner was not to betray whether he felt less at ease at the prospect of associating with a lawyer for the rest of the trip rather than with a man of the cloth. 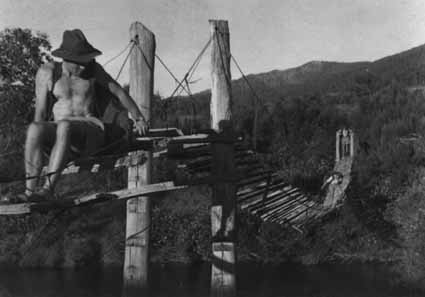