Memories Of The 60’s

Until a few days ago I expected to attend the 50th anniversary dinner. When this became impossible I realised that the obligations that overtook this intention represented the same things most of my fellow bushwalkers went bush to ‘defer’.

Even in the gentler, more optimistic 60s, we saw what was coming. Each of us knew we would lose in some measure the control over our lives. The Botany Lawn was where like minded truants put off the inevitable. Where minor break-outs and greater adventures were organised. I keep a few trophies from those days, mostly in my mind, sometimes in faded chemical images, which come to think of it, means much the same thing. But I have to tell you that memory can apply immense power at great range without warning.

I took a frail member of the family to The Edge at the Maxvision at Katoomba, because she is too weak to make it to the best lookouts. In the world view of SUBW members in the 60s, Maxvision would have been an abomination. Yet when we ‘flew’ through the canopy of The Bluegum Forest, and lifted into the upper reaches of the Thurat Rivulet I was paralysed by memory and emotion. I remembered Dick Donaghey, called the Kanangra Kid in the headlines, who broke his leg in the nearby Kanangra Gorge, and I felt the life long scar tissue on my neck which forever reminds me of the folly of trying to fit large bowlines on old fashioned hemp ropes through old fashioned karabiners halfway down a very cold waterfall. And I write not of other sad events which touched us all, as brothers and sisters in our wilderness playgrounds.

For too long, I realise, the Blueys have been become a fabrication, a silhouetted sum of the ridge lines seen at sunset from behind a workstation in a high city tower. Or shallow fog tides rising against thin lines of sandstone as you stretch your creased and folded body in a jet a few minutes short of Sydney. Somewhere, you tell yourself, there are still people in sleeping bags down there, considering a fire and a first mug of tea, and I know where I would rather be.

Above – “Next morning was spent getting to Breakfast Creek and was highlighted by Ben clearing a scrubby part down a slope at a difficult part of the creek” The dotted line shows Ben’s path. From – SUBW logbook 3.

I kid myself that I’m in touch with the bush by carrying a malibu to Burning Palms or Era and going for a surf, about once a year. If you could drop in on us, thirty five years ago, you would find strong signs of emerging awareness of environmental values, but the strongest motive of all was adventure. We wanted to keep the bush pure because we wanted a place where there were no buildings, no roads, especially no firetrails, and as few other people as possible. We were not gregarious. The nearest equivalent to a mosh pit was a button grass swamp, and just as our generation starting getting interested in dope, the uni medical centre stopped giving methedrine to anyone who asked for it. Bob Dylan was still bigger than The Beatles, although not for much longer. We had no politically correct mindset. In the 60s we thought the world was getting colder not hotter, with reason. At least once during 1963 and 1965 heavy snow falls covered the Megalong Valley over all the cleared ground, settled briefly in the Blue Gum Forest, touched the Razorback at Picton, and stopped skiers getting further south than Mittagong. A search and rescue exercise at Murphy’s Glen was briefly cut off. Snowplows were extracted from the ski fields to keep the Cooma-Bombala road open, through deep cuttings that persisted for weeks. Snow settled one night in Dural and along the Appin Road and on the Illawarra it was reported from the top of the Bulli Pass to Mt Keira.

We knew southern England used to be so warm it produced substantial quantities of good wine for the Romans, a reference seldom used in today’s important debates about our impact on climate. Which reminds me that The Union had Grange for around five shillings, and sensational old Hunter reds for around one shilling and sixpence. Our parties were pretty wild by today’s standards, and I have some photos to prove it, unless my wife has thrown them out, she is good at finding things like that! When I wrote for the 40th anniversary edition I recalled the early signs of competitive bushwalking. Doing the three peaks in 24 hours was one such test. At a time when Federation Peak was still a seven to 14 day undertaking/siege, figures were coming out of Hobart and doing it in 24 hours. A lot of the mystique of places like the South West of Tasmania was disappearing. When I did get up Federation Peak, at the end of a full traverse of the Western and Eastern Arthurs, it was a perfect day. The southern traverse was a walk, and the final pitch up from Bechervaise a one-hold wonder. Yet I will never forget the days of blinding hail and wind and snow, and momentary glimpses of Federation or other key landmarks through torn cloud.

When I select recollect in my bushwalking memory bank I usually get a scattered file, haphazardly picking up different personalities or places. There are some consistently revisited places, however. Pelion Gap in early December, barred with thick drifts of snow, buried under carpets of boronia and scoparia and a low growing cream coloured flowering scrub. Or one perfect moonlight night walking up from the Matukituki River to the Bonar Ice Plateau, the day before climbing Aspiring in the most perfect conditions I have ever seen on an ice climb. I can see each moonlight branch on the trees at the start, and delicate tracery of light and shadow on the distant clustered peaks of Cook, Sefton and La Perouse when we reached the summit. I sometimes hear the loudest sound in my life when I find myself low on the east face of Cook, as a block of ice the size of a large semi-trailer explodes into lethal lumps directly above two of us, caught unroped and front-pointing. And I often find myself with a party that went the long way up Glenbrook Gorge in a heat wave, and spent a relaxed afternoon on the way out at a pub somewhere to the south of Penrith or Emu Plains, long before the freeway and housing estate. While we may have not had the ideological framework of today in our approach to the bush I think we were totally honest in our motives. It was a good way to live, to move lightly through the natural world, and sometimes stop and listen to the branches moving in the wind. Now, when I have to visit cities with 30 million inhabitants, or deal with energetic young executives who are stuffing half their salaries up their nostrils, I am less certain than ever about the boundaries of wilderness, and I take comfort in those scattered files of memory of people and places.

We heard the wind rise and the rollers crash, we felt the bitter sleet and the benediction of the sun, we crossed the passes and stood on high peaks. We found pleasures where you will find reasons. 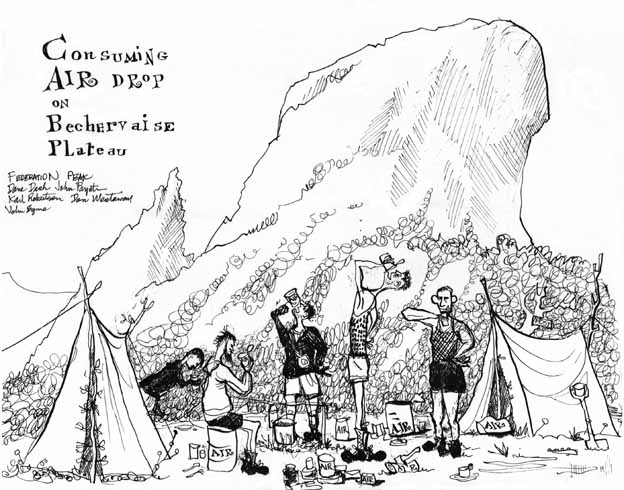