“I would strongly advise anyone against going beyond this point without having plenty of rope”. (from Col. Ol’s survey of Kan. Gor. at the end of Vol 1 of log:)

Nevertheless, on the occasion of the present walk one of our party did try to manage without “plenty of rope”: And it was this fact that made it (sic) such a memorable walk.

Sat. was perfect; a clear day, brilliant cotton wool flung over the valleys, Cloudmaker and Guouogang protruding like sore thumbs. For convenient abseiling, our party split into two, each with 2×150′ of rope. We, the second party, exchanged yells with the first as they scrambled down the scree, just off the left hand side of the photo. (No, we didn’t abseil from the top!) Drugged by the sun, it took all the nouse of our gallant leader to awake us from our stupor an hour later, in order to follow the others.

Great was our glee when, profiting from their mistakes, we found an express, albeit nettle scunged, rock shute to the bottom, thereby arriving at the top of abseil No 1 shortly before they did. Said abseil was a short 40 feet to the top of a long 200+ feet beside the second of the Kanangra Falls. During No 1, your scribes pack parted company with his person when the top cord broke. In its bouncing plunge, it almost sent Liz a-bouncing in similar manner, but she managed to hang on to a convenient tree.

The full party now sat down to lunch, contemplating the next abseil, a hairy object which, on first inspection, appeared bottomless. Many ropes were joined together, and flung to the hairy depths to assuage the monster, before Colin was able to set foot over edge. The din of the nearby waterfall made communication by voice impossible: by the time all 11 bods. were at the bottom an elaborate sign language had evolved. Colin disappeared over the overhang, and it was not until about 15 minutes later that his now-familiar, “I-have-reached-the-bottom” wave appeared.

It was not long before we discovered that 11 bushwalkers + one hairy abseil = one afternoon, and dusk was gathering before we were all down………. At least nearly down, for we had yet to cross under the waterfall and scramble 30 feet down the slippery rock.

It was during this scramble that Dick, momentarily blinded by the water falling on us, lost his footing on the slippery rock and slid, feet first, with as much ease as one might slide down a slipperydip, thiry feet to the rocks below. His legs didn’t look too good, so far as we could see in the dark, and he was bleeding from the mouth (only a cut). All we wanted to do was to get in from the dark and away from the hungry-sounding waterfall. Soon we, a wet and speechless lot, were eating a reasonable tea around a blazing fire.

Sunday was another perfect day; but not so perfect for poor Dick, who quite obviously was unable to move under his own steam. As a result of a council of war, Colin, Neil, Bob ? and the girls went off down the gorge as originally planned, Bob Masterman, Rick H. & Warwick climbed out of the gorge to seek the assistance of several Uni. Rovers known to be in the vicinity, while Jerry and I stayed with Dick. Most of Sunday was spent building dams, and inventing variations of 2-up, with peanut stakes, until, late in the afternoon, a shout from above us heralded the arrival of our three climbers, with Dr Bob Binks and a friend, who had had a rudely interupted fishing holiday at Oberon, (there were none biting anyway) and three cans of beer.

Dr Binks diagnosed a possibly fractured foot & a broken other leg, pumping various varieties of junk into Dick as he did so.

Beer consumed, Dick reasonably comfortable, and our doctor recuperated after his climb down, then our climbers led the way back up the cliff to the top. We sat down and prepared for Sunday night, happy in the expectation of the arrival of our “few rovers” for assistance. 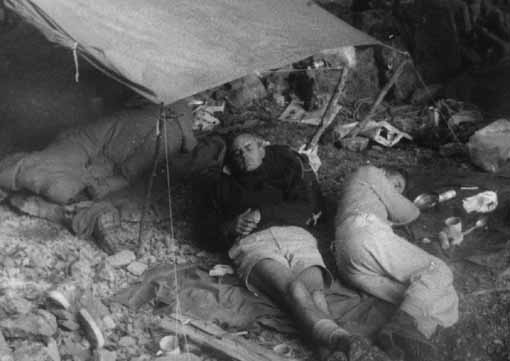 Above – Dick (in sleeping bag), Dr Binks and friend resting. Photo from SUBW logbook No 2

Monday morning, and we were awoken by the noise of a low flying aircraft: “Funny, you don’t see many aeroplanes out Kanangra way!” “Especially this early in the morning!” “He’s coming this way! — you don’t suppose his looking for us?” As he did a tree-skiming bank down the gorge, it soon became obvious that this was, indeed the case. Orange tents were spread, smoke was made, and our aeroplane blinked a light in acknowledgement. (Even after all this the papers marked our tent in the wrong place in a photo of the gorge!)

Then things began to happen: various bods, obviously not our “few Rovers” came abseiling down beside the disasterous waterfall including many of the Sydney Rockclimbers. Now the whole of the Federation’s Search & Rescue organisation was on our hands, and Dick had made the headlines. (“Boy Falls Down 3000 Foot Hole” etc.)

We set about devising ways & means of getting our patient out of the gorge. In the end the Rockclimbers decided that the route they had come down by (ie beside the waterfall) was preferable to trying to get him back up the waterfall itself, or lowering him down the next waterfall, or carrying him up the way our three climbers had gone.

The next few hours was spent by the Rockclimbers (while we sat at the bottom and watched in wonderment) in rigging, under the supervision of David Roots and Russell Kippax, an elaborate system of flying foxes, blocks & tackles, pulleys, skyhooks etc. A strait-jacket like stretcher was then buckled around Dick and stage one of the climb began.

Some idea of its complications can be gleaned from my diagram. In the first stage, Dick was carried on Russell Kippax’s back, a rope around his chest, while we at the bottom pulled via a block & tackle rigged on the first platform, a distance of about 30 feet (variously estimated by newspapers as being 60 to 200 feet)

In a series of traverse flying foxes to the top, poor Dick quite forgot about his injuries as he dangled over space, completely at the mercy of a thin piece of rope & various people pulling from the top. The job was not made any easier by the many loose rocks, seemingly held together by nought else than wet mud and which were periodically dislodged on we below, as we climbed, by those above.

Once up the cliff, the next was comparatively easy, just a case of hard work, in which about one hundred people of the S & R. organisation (memorandum, pay Federation affiliation fees on time!) had turned out to help, including Colin Ol, Neil and Bob ? who had been busy helping with the organisation of the business.

It was almost dark as we reached the last section of scree immediately before the top. Then it started to rain, but we thanked heaven that it had not done so earlier, as it would have made the poor condition of the cliff & slopes impossibly slippery. Fog came down, and drifted among the trees: the thunder rumbled, seemingly as if the god who lurks in Kanangra gorge was angry at being cheated of his prey. (A stretcher and my water bucket which had been left behind would have offered him little satisfaction!)

The top was reached, and the whole crew marched off through the fog, across the Kanangra tops moors, for all the world like a mob of body snatchers in old Dartmoor, with Dick suspended between them. The road was located by exchanges of cooees and beeps on car horns, and before long we were all back at the road.

Strange, but it was all quite an enjoyable operation, although I am sure that Dick did not enjoy himself one bit! Still, he was surprisingly full of beans after a thoroughly hair-raising and painful afternoon. There was quite a picnic atmosphere about the whole thing, and we were all pleased that it had been managed without the “assistance” of police & other parties. And it had got too cold & dark for the reporters, who had all gone home!

We, ie SUBW, then adjourned to Colin’s place, enjoyed a king-size feed, and then drove home to (much later) bed. And Dick to hospital. His injuries were not as bad as at first feared — one badly broken leg & a badly sprained & bruised other leg.

All in all, an eventful weekend in the bush!