or Life in the Seventies,

or How SUBW Ruined my Life! 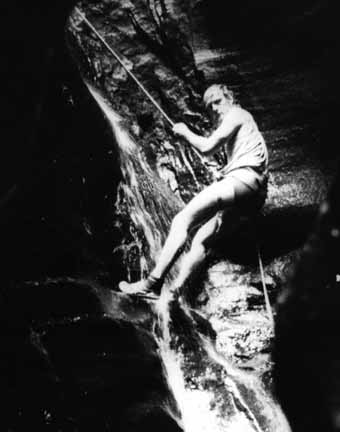 Above – Ross Bradstock in Claustral Canyon, circa 1977. Photo – David Noble

Life in the seventies for a young outdoor enthusiast was one of possibilities and opportunities. Imagine it – mobility sufficiently advanced to allow easy local, national and international travel. Information, (maps, books, magazines etc.) poised at a level to titillate the most mundane imagination. Affluence, sufficient to provide the necessary cash-flow for outdoor recreation. Time (thanks again to free university education – can you believe it!) available in nicely proportioned parcels to suit a range of tastes and appetites. Gear, even by today’s standards, adequate for the most extreme eventualities. Above all else the possibilities! No canyons north of Wollangambe, no tracks on the Western Arthurs, no climbs harder than 21, no alpine-style ascents of 8000 m peaks ……. The narrowing of those possibilities in the last two decades is staggering, unimaginable from a position then. What is important is the psychology of the time – the effect of those possibilities on young fevered minds. Yes I can hear the young bloods now, asking in murmurs, what on earth is this stupid old fart talking about ….. what can I say ….. you had to be there! Truly we were the chosen ones – inhabitants of a golden age. God, how it has ruined my life!

All this has nothing to do with the story. Mid-July 1978, two weeks out of bed subsequent to three in with glandular fever. Two months on the dole. Two and half years of Malcolm Fraser….. Winter, good snowfalls. Already one “season” at Mt Cook under the belt. Images of frozen waterfalls and steep, crisp snow constantly in the mind. Time for a trip to Blue Lake – essential preparation for the big possibilities you see. We had of course visited there the previous winter. Great trip – lots of snow – walked up from Guthega, bedecked with crampons, axes and ropes. Era tents pitched gingerly on the frozen surface. Another trip to Watson’s Crags from across the Geehi – a ludicrous outing worthy of telling at some other stage. All done to avoid the use of the dreaded planks.

At that stage the anti-skiing fraternity was ascendant in the club. The focus on scrub, canyons, scrub, and perhaps a little bit of climbing, was sharp. Skiing was for nancys, an invitation for derision. But of course it could in extremis be rationalized – a much more efficient mode of travel in snow – not to be appreciated or savoured of course. As well, experience in snow conditions gained while using this transport would serve those future jaunts in the great ranges of the world. I suppose even genocide can somehow be rationalized.

Thus my companion, Steve McDowell, and I journeyed forth one Friday evening. The trip down the old Doom Dieway (no freeway then boys and girls) was not without adventure in the blue Corona. I seem to recall a lack of brakes and a jet of supercooled air aimed at the hands of the driver were the major obstacles on this occasion. A blur of fatigue, fogged windscreen, hamburgers and excited conversation. Following the obligatory two hours sleep, the journey began in earnest at the Guthega carpark.

The equipment list warrants description. Fish-scale based, day touring skis (no edges), bamboo poles, low-cut super-flex boots – all hired in total ignorance of the task ahead from a well known emporium in Liverpool St. One 9 mm rope, 4 dexion “snow stakes”, ice screws, crampons, axes, paddy tent (no floor), choofer, wool shirts, elegant tweed trousers (expertly cut-off) and packs. Ah yes, the pack – my lovely new pack – a status symbol of the time – a “Joe Brown”. As Tom Williams was want to point out, the only person on earth it was likely to fit was Joe himself (a five foot pommy with arms like an orangutang). The idiot who designed this cutting-edge device had placed the upper shoulder-strap attachment mid-way on the back of the pack. When fully “extended”, to accommodate loads exceeding a cut lunch, this placed the centre of gravity 30 feet above one’s head. Thus equipped, I placed my feet in ski-bindings for the first time.

With the benefit of hindsight, conditions were appalling. A gale was rampant, the sky the colour of a Liberal Prime Minister’s countenance, the ground, sheet ice in all directions. The two novices set forth toward the Main Range. Actually Steven had skied for the first time two weekends before. It was with a mixture of panache and grace, after the first half-dozen or so falls, that he informed me that there was a left and right ski (binding actually). And falls there were – with the sickening monotony of a Rugby League match. No matter which way I went the “Joe Brown” would conspire to confound balance, ending inexorably with the propulsion of the ferrule of my ice-axe into the back of my cranium, concurrent with the grinding of wool and flesh on ice.

Lunch on a rock above the Snowy offered a respite from impending exhaustion. Retreat was lurking in our minds, but as yet unspoken of. With the conversation obliquely edging toward the inevitable, the first sign of Divine intervention occurred. Suddenly, we were bathed in warm, refreshing sunshine. The route tantalized ahead, spirits soared, piking was spurned. Rushing forward we made a miraculous discovery. Our skis gripped on the newly softened surface! Forward progress without uncoordinated thrashing was possible! Miraculously rejuvenated, as ignorant fools, we hastened into the trap.

With impeccable timing Huey lured us on. As we traversed the steeper slopes above the river the boom was inexorably lowered. Slowly but surely the wind increased, the sun retreated and the substrate became ever more icy. Forward (or rearward) progress became unlikely – down was more likely, propelled by the ever-eager Joe Brown. Gingerly we halted and shed skis, precariously kicking steps upward. Thongs would have provided grip of equivalent security. Eventually we popped over the top into the clutches of Blue Lake Creek, and an astonishing gale, a little below the Hedley Tarns. In later years we realized that such conditions were more the norm than the exception. The phenomenon became affectionately known as “The Barrier”. With fading light and little hesitation we decided the Era would not be up to speed in such conditions. Blown, half-staggering, we slithered down the creek toward the river.

Slightly sheltered by the ridge and with Joe off my back at last, we savoured the prospect of a night under Paddy’s finest canvas. In a haze of pain from thawing digits, embedded in my armpits, I stamped out a platform. Above the scream of the gale I caught a snatch of demented laughter. There was Steven frantically gesturing toward the river, muttering some nonsense about glue.

I stumbled through the gloom behind his crazed figure to a lower bank directly beside the mighty Snowy. Sure enough, as if by Providence itself (but you really know who) was a most comfy, well constructed and neatly rounded, 2-4 person igloo. You bloody beauty! Exhaustion, hunger, bruising and pain from nipped digits miraculously evaporated. The Joe Brown seemed to move (dragged actually) as if on a cushion of air. We were saved!

In complete contrast to everything else that had happened so far, we settled in quickly and efficiently. A roaring choofer, a bite to eat, a brew, sublime warmth, quietness and soon slumber. But what’s this? Water on my face – no problem, only to be expected given the heat from two bodies and a stove. A few drops here and there – nothing to worry about. Slumber.

“Are you getting wet? Yeah a little. Wind is picking up. Suppose. It seems lighter in here. Only your eyes getting use to the dark”. More Slumber. ” I feel spray. I see light through the wall. Those cracks were not there before!” A quick trip outside confirmed the worst – it was raining.

“She’ll be right, its probably just a brief shower” Disturbed slumber. “Christ! I’m getting really wet.” Parkas unfurled, sodden sleeping bags stowed, two pathetic figures entombed in a melting, dripping, crumbling ice-block. “It can’t last – we are better off here – at least its sheltered.” Gaping holes appeared in the windward side, the spray lashed our hunched bodies. Silently we packed up as the flimsy remains of the windward wall collapsed. Stoically we left by the tunnel exit, as if to ignore reality. Outside the gale clutched at us but we had other matters on our mind. Without a word we simultaneously attacked the structure with our axes in a frenzy of surprising vigour. At least they were used one time in anger on the trip. “Where are the tent pegs?” Frantic destruction was followed by chastened digging.

It was about one in the morning. In a haze of fatigued frustration we turned our backs on the remaining lump of crazed snow and trudged down the Snowy, calf to knee deep in porridge, our skis strapped to the packs, merely exacerbating the balance problem. A dawn of inestimable grey saw us ploughing a trench up the final slope below the Guthega lodges. Incredulous faces at fogged windows looked up from plates of toast and bacon at the two sodden, gormless figures. The car would not start – final reserves of energy were expended on a push out of the carpark. Eventually she fired and like drunken sailors we meandered off to breakfast at the Sawpit Creek servo. Slumped over a table among platoons of beautiful people priming themselves for a day of bump and grind at Perisher, it took us half an hour to summon the energy to order. Satiated, we took to the road – delirious with fatigue – a road safety zealot’s worst nightmare.

After a few near misses we stopped just down the road at the Crackenback River picnic area. We rolled out the flea bags in the shelter and slept for hours, oblivious to the comings and goings of tourists. Eventually we brewed copious pots of tea, made from water drawn from the River. In the early afternoon we drove home. We both spent the next week stricken with gastro-enteritis – nothing that a good dose of antibiotics couldn’t fix. Two and half months later we skied up to Blue Lake under skies of the same hue, over perfect spring snow. We climbed and skied for three days – a blur of frozen waterfalls and steep white slopes. The perfect trip – we were hooked.

Today it sleeted at my place at lunchtime. The report suggests falls down to 1000 m – images of frozen waterfalls and steep, crisp snow cross the mind. I’m off skiing tomorrow!