Whether or not this trip succeeded in its modest aims is beyond question. Its fruits were the discovery of just another two ‘new’ canyons in the South Wolgan area. However, besides the unquestionable achievement of these aims, little else can be agreed upon about this trip – well, perhaps some points, but… however, I digress.

Whether or not this trip was the product of Dave’s fertile scheming mind is unclear to me. However, after an eventful evening and morning (which were characterised by some rather extraordinary events in Gearin’s and on the Galah Mountain road), we found ourselves abseiling into a pleasant little gutter that seemed to disappear into Rocky Creek. After some short canyon stuff we emerged into the above creek. Already signs of dissension loomed as argument arose as to what name this profound ‘new’ canyon should have. This interlude provided an ominous interlude which was to dominate future relationships in the party!

So we proceeded down Rocky Creek for a mile or so to the Thunderstorm Canyon junction, which had been so named the previous week. Lunch was called so as to delay our ascent out of the valley. This allowed us to savour the cool splendour of Rocky Creek. As well we were able to torture Tom, who was doing his usual balancing acts on a horizontal branch over a deep pool.

The pass out was excellent and enjoyable. Our enthusiasm to come to grips with a second unknown canyon in a day was somewhat tempered by the heat. Maybe this was the cause of the latent surliness that suddenly became rife and vocal in our party! A sample of the conversation is reconstructed with as much accuracy as possible in the following dialogue:

Voice 2: (With mock seriousness) “This creek is bloody terrible I’ve never seen scunge like it. “

Voice 3: (With a hint of suppressed laughter) “Christ, I can’t climb wait until we can climb onto the ridge. It’s so cold in this canyon.”

And so it went! At first there was earnestness in this novel way of deriding one’s partners. But inevitably the sun took its toll and this line of conversation swelled with exaggeration and the ridiculous.

And so we came over the tops and dropped into the creek – or we ascended out of the creek and onto the ridge. A pass into the creek was negotiated with a straight forward hand-over-hand that is, we climbed out up a desperate wall covered in moss into the heat. As we relaxed into the cool of the creek we realised that our new mode of communication might present problems if we happened to find a canyon. For example, we could foresee that if whoever was leading struck difficulties he may lapse into using words which he may truly mean in the heat of the moment! Hence:

“There’s a desperate move down this next bit.”

Could be misconstrued as:

Our worries were soon confirmed as we meandered our way down the creek. The creek was itself pleasant and indeed showed all the signs that it would indeed enter into canyon. However any person foolish enough to utter words to that effect was met with the crushing reply:

“Bullshit! This ridge is just shit!”

As the creek dropped and became more promising we all aired our hopes:

“Well the ridge is widening out now – it s probably the most boring ridge I’ve ever been on.”

Suddenly a large boulder blocked our progress and we all realised that the guts had dropped out of the creek. The entrance to the creek lies underneath the boulder. Dave went down first and landed in a heap at the bottom. I went next and found out why. The rock was slippery in the extreme and it was impossible to chimney or climb down properly. I landed on top of Dave. One of the funniest scenes of the trip occurred as Tom with his usual finesse chimneyed down. Bridged desperately across the sharply flared walls, with his feet and hands slowly losing grip on the slick rock, he exclaimed with a wide grimace:

Miraculously he made it to the bottom with only some minor assistance from gravity. The canyon that followed was superb. The drops were not great in height but difficulty was had in finding belay points. Hence several waterfalls were chimneyed down. At one point we bridged over a pool on fingertips and toes on greasy rock at full stretch. The constriction was tight and dark as the falls and pools were negotiated. Finally a thirty yard tunnel was encountered. This proved to be the icing on the cake as it were. Dave and I were pulling down the ropes when from round the corner the others yelled that it was “opening out.” According to the pattern of confusion that had been set previously in the canyon we asked anxiously if they were serious:

“Of course not” came the reply which could of course be taken in the negative to mean they were, or conversely

So we swam and waded around the corner to see the tunnel in front of us.

After the tunnel things opened out – I mean really! It was but a short way to Rocky Creek and a good campsite at the junction.

I think it was before we even unpacked that the subject of naming our superb new discovery arose. We all of course disagreed not to call it “Contradiction Canyon”. Hence this is the reason why I am not writing this. 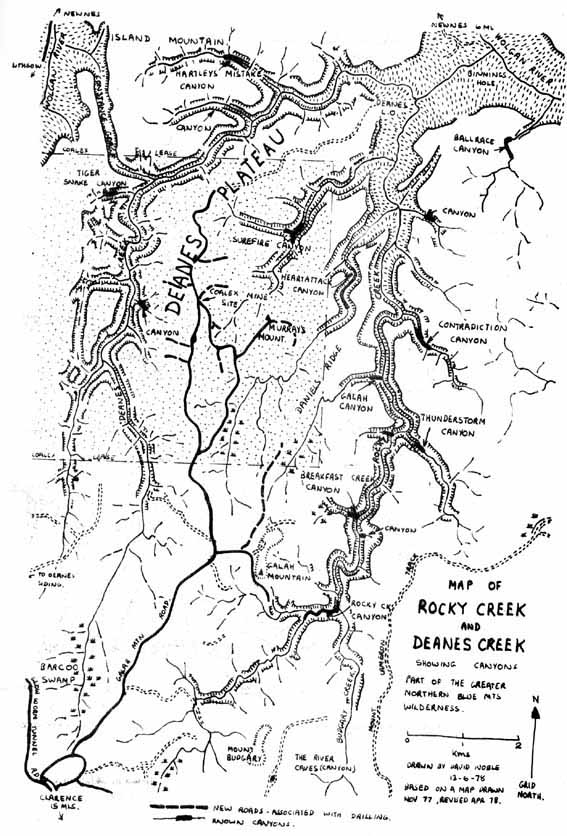