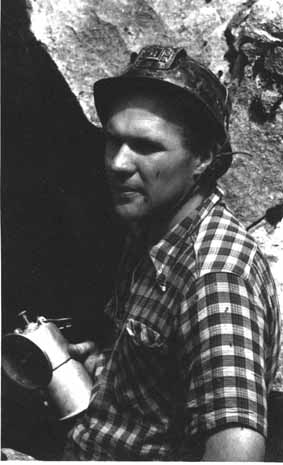 The first entry into the main cavern took place sometime in late 1946 or early in 1947 by members of the SUBW; however, the discovery of the lead into the system was made a few months earlier by Lindsay Ingall, Ken Bailey and myself as members of the “YMCA Ramblers”.

This discovery was made on the last evening of the “Rambler” stay at Colong. We were only able to negotiate a dried out sump and a very narrow tunnel into the ante chamber (the main cavern was not discovered until some months later on the SUBW trip). Prudence and fast failing torches forced Ken, Lindsay and myself to beat a hasty retreat.

The SUBW trip was arranged by Lindsay and myself to make it somewhat economical to travel to the caves to further our exploration.

I’m not sure whether the group travelled by taxi or bus from Camden to the starting point at Yerranderie but even so that was an adventure in itself. Electric train to Liverpool, steam train to Campbelltown and another steam train (no. 19 class) to Camden. Then from Camden to Yerranderie arriving there in the early hours of the morning and sleeping in the old telegraph office.

We used the river track from Yerranderie to the caves, coming back Lindsay and myself negotiated the Mootik Range, a beautiful experience.

Back to the story, Lindsay and myself negotiated the sump, entered the ante chamber and decided to climb up beside a beautiful yellow flow stone where we were surprised to find a narrow cleft about 3 metres high, which we climbed and there it was, a splendid small cavern with “egg and bacon” shawls; then over a formation surmounted by a stalagmite christened a little later as “Pegies Peg” by Bill Taylor; we had arrived at the main cavern. Back to the group to tell the good news.

Needless to say, everybody enjoyed themselves not only by exploring the new cavern as well as the old but sitting quietly in the darkness experiencing that personal solitude that a limestone cavern can give (except, of course, some character accidentally switching on his or her torch illuminating a quiet cuddle between two of the party).

I made a return trip some twelve months later but by then the drought had broken and the sump was impassable. I later used another entrance known as the “boot jammer” which was discovered by somebody else in the 1950’s; it led into the chamber with the shawls mentioned above. How the cave got its name “Woofs Cavern” I’ll never know; perhaps I idly wrote my name with a carbide lamp, possibly in negotiating the new alternate entrance, or someone wrote it in an article in either the Federation of Bush Clubs magazine “The Bushwalker” or by a Barbara Richards who had an article published in the Women’s Weekly.

The SUBW was for bushwalking, the trip to Colong was to add a different experience, however I like to remember the more dedicated approach to caving by such members of SUBW as Willie Hilder and Quentin Burke and not forgetting (and with gratitude) Peter MacGregor’s leadership where he and Marion Pegum and myself were the first to enter the Eastern Eagles Nest Cave at Yarrangobilly.