After a sumptuous meal of ice cream and caramel sauce and a brief holdup we left the Turton menagerie. We stopped at Nowra for petrol and all got out for a brief “Stripping the Willow” to stretch our cramped limbs. The car was left at Yadboro Creek but could have been taken up the fire road to a cairn which marks the track up the Kalianna Ridge.

The wind was blowing at gale force and a sudden gust brought some rain so we ducked into a cave just around the corner of the Castle in the first cliff line, where we had lunch.

The first H2O we found just behind Irambang just before the first gully leading to the Valley of the Monoliths.

It was not long before we found that we would not have the camping cave to ourselves. After some hunting then levelling and packing we had procured enough relatively level bedsites for seven people, part way up the cliff. Athol had to sleep near the campfire.

That night we had a big singsong and were gratified the next morning when George Brown an unattached walker came to see us to express his appreciation of our singing and regret that it seemed to be a dying custom.

At 9.30 Athol and I were in the crack at the beginning of our climb fixing belays, untangling the rope etc. Athol gave me a few pointers on how to second a multi-pitch climb and we were off. The first pitch was quite easy, up the nose of the southern side of the crack. The second pitch was not a hard move for Athol, but when my turn came I found the crucial left handhold about 3″ beyond my reach. After some thinking and thrutching I managed to heave myself across the crack and up the rock, through the scrub, to the belay. After that we moved quite steadily up the crack, across to the right, over another slot, up through quite a lot of scrub and one or two nice chimneys. Chimneying with a pack was not entirely successful, but presented no major difficulties at this juncture. By this time we had been getting encouraging calls from Rae, Merinda, Lance, Lowan and Flora and the plaintive cry of “Athol, give me a piggyback” which we got to love so well. A call from Graham and Carol cheered us on.

Our last pitch along a diagonal crack in the otherwise bare, orange sandstone wall, was in full view of the people at the top. We decided to finish the climb for the photographers by going up again to the left rather than just walk off, since it was still quite early in the day. 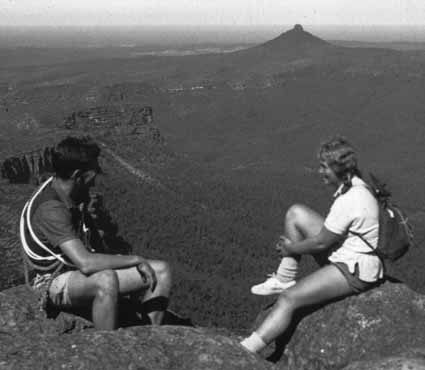 Above – Athol and Wendy on top of the Castle. Photo – Flora Turton.

Several rather big parties of scouts, N.P.A. etc., came and went while we stayed admiring the view which yesterday’s wind had made so clear.

The thought of food and campfire soon turned our footsteps back to the valley where we found that the camping cave accommodation had been filled to capacity and tents were springing up all around.

On the way down from my eyrie at tea time I chanced to fall the last 5 or 6 ft. From Graham “Hey, do it again. I didn’t have my camera ready.” and from someone else: “That’s not the recognised method of coming down cliffs.”

That night we were invited, with many others, to join the Scouts’ campfire where we stayed singing and talking late into the night.

Our second climb was further along from the first, below the narrower of two long cracks which cleave the face quite close to each other. We started about 9.30. The first move was a free climb to a mallee belay where Athol proceeded up belayed to a good ledge with a solid rock belay. The pitch that followed took us till after lunch to reach the top, since it required artificial climbing involving about 8 bolts, and since neither of us had done any artificial climbing we had to start our experience right from the beginning.

A little more climbing brought us to the base of the crack which we chimneyed for a few feet and then, inspired by Graham’ s encouraging call, “The cracks are overhung at the top,” we moved out on to the face up a scrubby crack, across and up another crack on to a triangular shaped pylon separated from the face by the last crack.

At this stage our hopes were again raised when Rae yelled, “Are you going up or down? “

It was now late afternoon and quiet as the shadow of Renwick chased us up the face.

The next move proved to be the crux of the climb. One bolt was hammered in on the face across the crack and an etrier attached. The leading rope was put through the karabiner at the bolt and Athol started off. Handholds were nil on the sloping ledge and footholds likewise except for one swinging etrier. Nevertheless, after much consideration, he edged his way across to the left with friction only until he reached a good foothold, thence to the tree where he rapidly secured a runner. There he put in another bolt for direct aid, which was a big help to me, and will be to any future party. This, the crux, was graded Hard Severe.

The corner which followed, I believe, was not more than Mild Severe, but I had to put up a good struggle before I was allowed through. At one point I was wedged between a tree and a rock no foot grip and listened to Athol who was carrying on a conversation with Flora who was way up the valley. The gist of the conversation was, “Don’t bother with a top rope; we’ll probably make it, but bring torches to meet us.”

The next two pitches were relatively easy, the first, with a bolt belay into a north-facing cave, which fortunately had an opening on to the west face where the second pitch led across a very easy, very exposed slope, up a final chimney on to the rock at the top.

Two very relieved climbers packed gear, ate a few handfuls of peanuts and set off immediately into the dark. Going was slow and dusty, and near the tunnel we lost the track and since we could not even see each other three feet apart, and since we knew that Rae and Flora were near, we sat down and waited. Very soon we saw torches through the tunnel and were all happily reunited.

Arriving back at camp we found that a rescue party was going to set out at 9 pm. if we hadn’t arrived by then, so we had just made it.

Hot drinks and food were ready and well received and even though we were tired out we sat around the dying fire till midnight talking. One of the highlights of the evening was the Abrahams’ definition or explanation of female Bushwalkers. That they were “unhibited ladies” was approved and accepted (quite proudly, I think) by the ladies present.

The next day’s activities started rather late. First was a run down to the natural arch then Rae, Athol and I ran up the Castle again so that we could record yesterday’s climb in the book. We took about an hour to enjoy the peace and solitude now that the crowds had left, then ran down to Yadboro Creek, having a quick lunch on the way to join Flora et al.

On the windscreen of the car we found a note left by Graham and Carol:

After a quick wash, or a full scale bath, depending on the degree of dirtiness, we packed into the Turtonmobile and once again headed home.