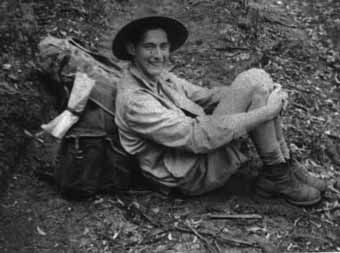 The SUBW 50th Anniversary Magazine needs articles? What to write about? No doubt others will write about those celebrated SUBW outings of the ’40s:

* the epic trip across the Cradle Mountain Reserve in Tasmania

* the 11-day trip in the Snowy Mountains

* the canoe trip on the Nepean on a wintery June weekend

Not so well-known perhaps, and thus not so well documented, are the expeditions of the SUBW’s “Sewer-Side Squad”. So I’ll take it upon myself to write about one of these outings.

I cannot recall the names of the other members of the SSS. The roster varied. Suffice it to say that they were bushwalkers to whom waiting for a weekend to go walking was an intolerable ordeal. They arranged mid-week outings! At night! Underground!

With the necessary tools at hand, a suitable sewer manhole cover was located in downtown Sydney. Once removed, access was gained to such interesting spots as the network of storm drains flowing down to Circular Quay, the Tank Stream, and the then-incomplete underground railway system tunnels. If we were on foot, we tried to find a man-at-work barricade to put around the open manhole. If someone had a car, a member of the party would be left behind to roll the car over the manhole and await our return. Exhausting the possibilities of this form of cityside speleology, the Sewer-Side Squad turned their collective eyes heavenward. Aha! The Sydney Harbour Bridge!!!

The Bridge Authority, of course, was aware that university students and other ne’er-do-wells might take an interest in their precious 16-year-old bridge, and had lovingly protected it with high chain link fences at all obvious and not-so-obvious potential points of entry. On several preliminary outings, the approach from the deck had been scouted and ruled out: too conspicuous, too well-protected. So reconnaissance moved to the pylons.

It seemed that the south-east pylon might provide a “go”. So after classes one Tuesday night in November, 1948, I rendezvoused with SSS member Mick Hammond underneath the bridge, prepared to test its defenses. A drunk appeared to be going to flake out there for the night, but we urged him along. Changing from street clothes into a boiler suit and tennis shoes (standard speleology outfit) we first tried a lengthy “run-up” to the smooth granite slope of the pylon. The hope was that our momentum would carry us up to a chain-link fence surrounding the point where the bridge’s lower chord was anchored by a huge bearing pin.

No go! We couldn’t get up enough momentum, and the granite proved too slippery, even for tennis shoes to grip.

A different approach was tried. By spread-eagling on the granite to get maximum friction, I was able to inch up the slope on my back and get to the fence. Then I passed a rope to Mick, and he was able to haul himself up to join me. So far, so good. The next barrier, an eight-foot chain link fence topped with four strands of barbed wire, then yielded to our persistence.

Once over the fence we found ourselves on a horizontal concrete platform right next to the big bearing. Eureka! As we had suspected, there was an opening big enough for us to crawl into the chord right above the bearing . We now found ourselves in a big hollow girder, ascending at quite a steep pitch. Luckily, there were empty rivet holes to hook our fingers in to make the climb easier. We did wonder, however, why some rivet holes were empty. The literature said that 6,000,000 rivets were used in the construction, and we wondered about the contractor short-changing the Bridge authority on these empty holes. About every ten feet, we had to climb through a manhole to get to the next section. My diary notes use the word “reptating” (moving as a reptile) to describe the journey through the interminable manholes. As the climb flattened out, we realized we were reaching the top. Somewhere near that point, we found a trapdoor. Luckily, it had been recently used, and was not too tightly closed. Its latch yielded to a couple of taps of our hammer and we were able to pry it open and get out into the open air.

What a magnificent sight now presented itself. Lights from city buildings, apartment houses and homes reflected in the water. Distant neon signs flashed and flickered. Ferry-boats came and went to Circular Quay, a mere handful of passengers boarding or alighting, for the night was getting late. Off to the east, a gap in the lights indicated the mouth of the harbour, where maritime beacons flashed. After cooling off, we made our way along the catwalk to a sloping brace girder which appeared to lead to the upper chord.

The catwalk on this girder brought us right to the summit. Perched there, we marvelled again at the view, improved now by an unimpeded vista in all directions. Two of SUBW’s skinniest, supported by 52,800 tonnes of steel and 95,000 tonnes of concrete. Mick insisted on crawling to the edge of the chord and sitting with his legs dangling over the edge. I shut my eyes till he had done his thing. Looking down 134 meters to the water wasn’t high on my priority list.

It was enough to look down on the roadway where taxis, buses, cars and lorries whizzed along like toys. On the east side, the occasional tramcar rattled off to Mosman and Spit Junction and on the western side tracks, electric trains thundered in both directions, their movements translated into vibrations we could feel quite distinctly.

Yet another catwalk enabled us to cross easily to the western side of the bridge, where a different vista, ranging from the freighters berthed at Darling Harbour, up to the distant lights of Hunter’s Hill opened up. Here we found travel on the outside of the wide main chord a lot easier than “reptating” inside the lower one. The only impediment was a crane, underneath which we had to crawl (more reptating). We tried to get inside the cab of the crane, where a teapot and “fixin’s” beckoned. But its door was firmly locked. We did, however, get inside the main chord, and found that it did not have manholes in between sections. So we wandered on down this “highway” almost to the toll booth, before retracing our steps back to the top of the arch.

According to my notes, the most thrilling part of the night was yet to come: the descent of a steel ladder, hand over hand, back down to the lower chord. We then uneventfully retraced our steps back to our entry point, changed clothes and parted ways.

Each time I revisit Sydney I look at the magnificent sweep of steel that makes up the Harbour Bridge, now a venerable 64 years old, and shudder. What was “thrilling” to me back then gives me chills down the spine today!