A Blunder In The Stockade

The delights of Northern Blue Mountains walking are many and varied: I think it is the immensity and complexity of the great sandstone cliffs and nebulous ridge systems which attract me. For others of more ambitious nature it is an urge to violate the cold depths of the primeval canyons which lie untouched and waiting. Still others stubbornly seek their straight tracks through the idiosyncrasies of the Bluies scrub. Some old salts though just seem to empathise with the remoteness.

Whatever the attraction, the atmosphere in Keith Maxwell’s car was one of eager anticipation as it hurried Keith, Dave Noble, Chris Cosgrove, Bob Sault and myself through the night towards Nullo Mountain, that Northern Blue Mountain peak better known as The Great Badger Mound.

A late arrival justified a late start and it was mid-morning before we were following the trails which thread their way through blackberry clumps and bellowing mobs of cattle which have sprung from Nullo’s denuded igneous plateau. We met a couple from Newcastle Bushies enroute to our lunch site at Hool em Boy Point where immaculate views are to be had across the Widden Brook; and the rugged fastness of Holbrook Castle and Chromach Peak look quite impressive whilst the “labyrinthine complexities” of the Mt Baker ridge systems lead to the long scree-scarred bulk of Mt Kerry, with its remarkable ribbon gum stand on the horizon.

From here we dropped onto the hidden causeway which connects the Badger Mound massif with the Mt Cox and the Pomany Ridge System Our plan being to descend Emu Creek which isolates these two systems and return to the cars via a traverse of the pinnacled ridge, known as the Stockade, which leads back up onto Nullo.

This creek seems to typify the streams of that area – the upper parts being choked with stinging nettles and some tiresome scrambling over and under logs. This soon gives way, however, into comparatively open going through coachwood and beech; dappled leaf mould and grovelling stream bed passing like the time underfoot.

Several miles of this agreeable gorge passed before the imminence of evening impressed itself upon us. The circumstances were fortuitous however in the presence of a large entrenched volcanic neck – the Lost World Crater – a short distance up a handy side creek. The crater was disappointingly scrubby but a large natural arch and overhang in the constricted neck of the crater were suitable compensations.

A late night was had consuming a couple of bottles of excellent vintage wine graciously donated by a member of the party, and exploring a remarkably constricted cave discovered in the back of the overhang.

The sun was very high by the time we were away on the Sunday morning. We walked a couple of miles of Emu Ck, flanked on the west by the towering cliffs of The Stockade. It was around midday by the time we had climbed the slopes up to the crest of the ridge from whence the Stockade abuts.

Who was it who said “no worries! We can outflank the cliffs on the western side….” Well he was wrong. Much tree-lassoing, hand-jamming, chimneying, bridging, packhauling, up exposed steep, though unsustained technically easy rock, saw us stopping for lunch around 3 pm – this was supposed to be bushwalking!? A steep scubby gully led to the well-formed first peak. The second peak was soon negotiated with some route-finding and a 3 metre jump into thick scrub.

Now it was about this time that some of us began to doubt our chances of reaching the car that night – with it being 5 or 6 miles across unknown ridges, the sun sinking over the horizon and none of us with a torch. This, of course, was piking and as such was scoffed at by the more hardy members of the party. A large chasm loomed across the ridge – it was attacked in the proper style, our hardy friends clinging and traversing above precipitous drops in the dark; the pikers muttering at the top. Suddenly a barrage of boulders, gravity inspired, crashed off into the dark and, much to the latter’s relief, it was decided to call it a night.

Views of the Yodeller Range to the north were spectacular in the sunrise. An early start (about 9 am) followed and a circuitous and at times scrubby ridge followed back to Nullo, and a couple of miles later the car.

On reflection I think we all agreed that the highlight of the trip, however, was the counter lunch we had at Kandos on the way home. 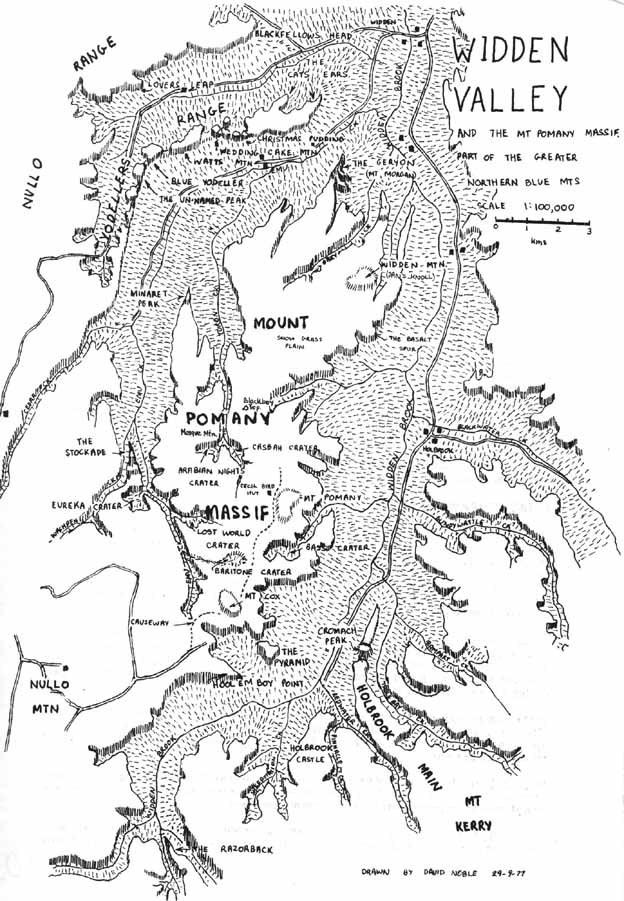