All In A Day’s Work

We were planning to do a night trip down Claustral Canyon on the weekend, with a warm-up down one of the Canyons in the Galah creek area NE of Lithgow. Why, we wondered, were we doing such a trip? Its difficult to explain, but no-one could find any reason why we shouldn’t. And besides, the walk and abseils down Claustral were still fresh in our minds following the trip there the previous weekend.

Pleasantries were exchanged in the morning between two thirds of the party at the North Richmond Cake and Pie Shop, a compulsory stop on any drive along Bell’s Line of Road. The remainder of the group was encountered – Fester and his band of Polish Terrorists – at Bell Service Station.

Huey’s welcome for us to the Blue Mountains could not have been more spectacular. Lightning bolts continuously lit up the sky around us, with many strikes occurring close to our car on the exposed road. The rivers of water on the road raised doubts about the safety of the canyon trips. Luckily the rain subsided.

The three cars were soon travelling along a dirt road to the start of the walk. Old Mole’s Volvo led the way at a reckless, but safe (??), speed. Fester was staying close behind, attempting to keep up. A Volvo beating a V8 just was not on!!

Then Fester was not in his rear vision mirror any more.

Following behind we discovered Fester’s car on the side of the road with his front fender pushed in, after having done a 360 on a slippery corner. We drove on after some quick panel-beating. The last straw for him occurred when his exhaust system dropped out several kilometres further down the road leaving it lying in the centre of the road. He limped back to Sydney saying that he’d try to get another car to meet us for the Claustral trip.

As he roared off, sounding like a tractor, we knew that was the last we would see of him. A man whose lifelong ambition was to build a car made from stolen Police car parts, he knew when he was beaten (for the time being). 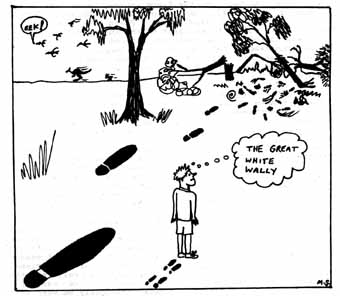 Rocky Creek was the canyon we decided to traverse. No abseiling was required, and it was reasonably short, and very spectacular. As the cliff walls on either side of the creek narrowed, and the floor of the creek dropped down, we knew we were in the canyon proper. While wading and swimming through the icy water, the green contoured rock-faces towered above. Shafts of sunlight in the middle of the day cast grey columns in the mist filled canyon.

As the creek opened up again, a late lunch was due, where a fire was built to dry us off. Many hours later, feeling much drier, fitter and fuller (after finishing off a large watermelon) we headed back to the cars via a mostly easy cliff pass. Some of the effects of three successive late nights of raging were taking their toll on Norm and Anja. Yet their determination to do Claustral was never stronger.

Back at Lithgow the rain began pouring down again. By the time we arrived at the start of the Claustral Canyon Track, at Mount Tomah, the downpour had ceased. With nightfall approaching, we surveyed the dark clouds around us, and predicted that most of the bad weather would miss us. If it rained heavily while we were in the canyon, a wave of water would come down, washing us away. With our torches in hand, and abseiling gear packed, Our party of four was ready to head off. Suddenly the sky lit up, and the ground shook. Huey let the clouds open up above us, as more rain pelted down. That settled the matter, and in no time we were in a pub in Richmond, deciding what to do next.

After an early morning dip in Whale Beach, Norm proceeded to search for the infamous Whale Beach Canyon. An hour later after having scampered along the slippery cliff-tops at the back of some peoples’ back-yards, no way down was to be found. Norm couldn’t recognise the pass in the dark, so the waterside slot eluded us.

An eventful day had ended, most of us deciding we needed some sleep before going to work, a few hours later. For some it was the finish of a four day fiesta of activities, and for the other half it was the completion of an action packed, unpredictable, but enjoyable day.